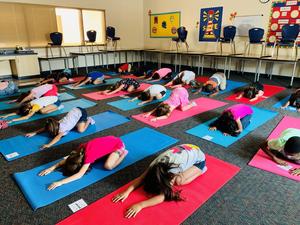 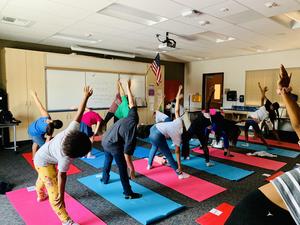 Hemet Elementary School has introduced yoga during the second half of lunch and scholars are loving it!

Lena Abella-Saunders, Hemet Elementary’s Counselor, was scrolling through social media when an interesting article caught her eye. She saw that a school in the Midwest implemented the use of yoga for its students. Intrigued by the idea, she began to research the concept and found the benefits students had such as an increase in coping skills and a reduction in aggression and tantrums. Hoping to implement this for the students at Hemet Elementary, she pitched the idea to her Principal.

“We, as a staff, have been trying to implement mindfulness strategies this school year,” said Principal Dr. Kristi Watson. “When Lena approached me with this idea, I was immediately on board, because it provides another opportunity for our scholars to gain calming techniques in a fun and unique way.”

The yoga classes are voluntary and available every Thursday for second through fifth graders. Students can attend during the second half of their lunchtime.

“Students eat their lunch and then have the opportunity to come to yoga for the second half of their lunch,” said Abella-Saunders. “It’s another way in which I get to build relationships with our scholars.”

Abella-Saunders is hoping Hemet Elementary scholars can view this time and space as a safe place in which they can further connect to their school and staff. She said in the two weeks since they have offered the class she has seen students that normally do not participate in school wanting to attend her yoga sessions. In fact, all of her yoga classes were full by the second Thursday she started offering it.

Abella-Saunders said she sets up themes for each week. She will take traditional yoga poses and practices and incorporate them to fit her theme. For example, one of her themes was “Superheroes.” She spent the first part of the session asking students what characteristics Superheroes have. Students replied with words like “brave” and “strong.” She then asked students to get into poses like Warrior One and say, “I am brave” or “I am strong.” She then changed the names of yoga poses such as Locust and Malasana to Superman and Spiderman.

The response from students has been overwhelmingly positive. As soon as the yoga session was over, students thanked their Counselor and asked when the next one would be. They discussed how relaxed they were and how great they felt and exclaimed that they could not wait for next week.

Thank you Hemet Elementary Counselor Lena Abella-Saunders for providing a place where students can relax and develop new ways to handle adversity.